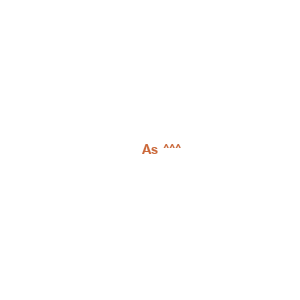 Poisonous by inhalation of dust or by ingestion. Regardless of exposure route, symptoms in most cases are characteristic of severe gastritis or gastroenteritis. All chemical forms of arsenic eventually produce similar toxic effects. Symptoms may be delayed. (USCG, 1999)

Fatal human dose 70-180 mg depending on weight. Estimated lethal dose for a 70 kg human as As (III).

Normal values of arsenic in urine, … vary from 0.013-0.046 mg/L, to 0.13 mg/L, to 0.25 mg/L. The urinary excretion, in mg/L, of elements that are freely eliminated by this route, such as … arsenic, is at most 2.5-5 times the occupation exposure in mg/cu m of air. It is apparent that biological monitoring for arsenic by urinalysis would be of limited value in determining whether or not the NIOSH recommended standard … was being met or exceeded.

If material involved in fire: Extinguish fire using agent suitable for type of surrounding fire. (Material itself does not burn or burns with difficulty.) Use water in flooding quantities as fog. Use foam, dry chemical, or carbon dioxide. Arsenical cmpd, liquid, NOS

Solvent extraction with high molecular weight amines and quaternary ammonium compounds may be a promising technique for the removal of toxic elements like … arsenic … from industrial effluents.

Separated from strong oxidants, acids, halogens and food and feedstuffs. Well closed. Provision to contain effluent from fire extinguishing. Store in an area without drain or sewer access.

Decomposes on heating and under the influence of light and moisture. This produces toxic arsenic fumes. Reacts with strong oxidants. This generates explosion hazard. May decompose explosively on shock, friction or concussion.

Loses its luster on exposure to air, forming a black modification + as2o3

CAN BE HEATED TO BURN IN AIR WITH BLUISH FLAME, GIVING OFF AN ODOR OF GARLIC AND DENSE WHITE FUMES OF ARSENIC TRIOXIDE (AS2O3).The gas is heavier than air and may travel along the ground; distant ignition possible. As a result of flow, agitation, etc., electrostatic charges can be generated.ARSENIC reacts incandescently with bromine trifluoride, even at 10°C [Mellor 2:113 1946-47]. Causes bromoazide to explode upon contact. Ignites if ground up together with solid potassium permanganate [Mellor 12:322 1946-47]. Is oxidized by sodium peroxide with incandescence [Mellor 2:490-93 1946-47]. A combination of finely divided arsenic with finely divided bromates (also chlorates and iodates) of barium, calcium, magnesium, potassium, sodium, or zinc can explode by heat, percussion, and friction [Mellor 2:310 1946-47]. Bromine pentafluoride reacts readily in the cold with arsenic. Ignition usually occurs. Reacts vigorously with fluorine at ordinary temperatures [Mellor 9:34 1946-47].

Arsine is formed when any inorganic arsenic bearing material is brought in contact with zinc and sulfuric acid.

When arsenic is heated in air it will burn and form a white smoke consisting of arsenic trioxide (As2O3).

Inorganic arsenic Several studies have suggested that women who work in, or live near, metal smelters may have higher than normal spontaneous abortion rates, and their children may exhibit lower than normal birthweights. However, these studies are limited because they were designed to evaluate the effects of smelter pollutants in general, and are not specific for inorganic arsenic. Ingested inorganic arsenic can cross the placenta in humans, exposing the fetus to the chemical. Oral animal studies have reported inorganic arsenic at very high doses to be fetotoxic and to cause birth defects. Arsine Human studies have indicated higher than expected spontaneous abortion rates in women in the microelectronics industry who were exposed to arsine. However, these studies have several limitations, including small sample size and exposure to other chemicals in addition to arsine.

The substance may cause effects on the gastrointestinal tract. This may result in severe gastroenteritis, loss of fluids and electrolytes, cardiac disorders, shock and convulsions. Exposure far above the OEL could cause death. The effects may be delayed. Medical observation is indicated.

The substance may have effects on the skin, mucous membranes, peripheral nervous system, liver and bone marrow. This may result in pigmentation disorders, hyperkeratosis, perforation of the nasal septum, neuropathy, anaemia and liver impairment. This substance is carcinogenic to humans. Animal tests show that this substance possibly causes toxicity to human reproduction or development.

The substance is combustible but no flash point is available in literature.Depending on the degree of exposure, periodic medical examination is suggested.Do NOT take working clothes home.