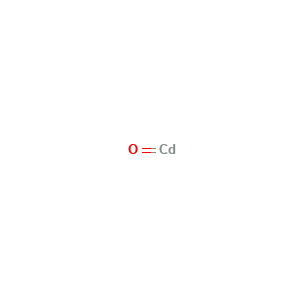 The lethal inhalation dose of cadmium oxide in humans is 2,500 mg/m3 for a 1 minute exposure. Lethal exposure has been established at 50 mg (cadmium)/m3 for 1 hour for cadmium oxide dust and 1/2 hour for the fume. These concentrations may be inhaled without sufficient discomfort to warn worker of exposure. Inhalation may cause acute tracheobronchitis, pneumonitis, and pulmonary edema. Exposure can cause kidney and lung damage. Acute exposure by inhalation may cause death by anoxia. The lowest human toxic inhalation concentration is 8.630 mg/m3/5 hours for the fume. Persons with respiratory disorders should be excluded from contact with this material. (EPA, 1998)

If material on fire or involved in fire: Extinguish fire using agent suitable for type of surrounding fire. (Material itself does not burn or burns with difficulty.) Use water in flooding quantities as fog. Use “alcohol” foam, dry chemical or carbon dioxide. Cadmium compounds, NOS

When heated to decomposition, it emits toxic fumes of cadmium. (Non-Specific — Cadmium Compounds) Fire may produce irritating or poisonous gases. Runoff from fire control or dilution water may cause pollution. Oxides of cadmium react explosively with magnesium when heated. (EPA, 1998)

Personal protection: particulate filter respirator adapted to the airborne concentration of the substance. Do NOT let this chemical enter the environment. Vacuum spilled material with specialist equipment. If appropriate, moisten first to prevent dusting. Carefully collect remainder. Then store and dispose of according to local regulations.

Personal protection: particulate filter respirator adapted to the airborne concentration of the substance. Do NOT let this chemical enter the environment. Vacuum spilled material with specialist equipment. If appropriate, moisten first to prevent dusting. Carefully collect remainder. Then store and dispose of according to local regulations.

1) remove all ignition sources. 2) ventilate area of release. 3) collect released material in the most convenient and safe manner for reclamation or for disposal. … cadmium dust

Separated from food and feedstuffs. Store in an area without drain or sewer access.Storage temperature: Ambient with open venting

Reacts violently with magnesium when heated. This generates fire and explosion hazard.

Oxides of … Cadium … can react explosively with Magnesium when heated.

When heated to decomposition it emits toxic fumes of /cadmium/.

The substance is irritating to the respiratory tract. May cause mechanical irritation to the eyes. Inhalation of the aerosol may cause lung oedema. See Notes. Exposure far above the OEL could cause death. The effects may be delayed. Medical observation is indicated.

The substance may have effects on the kidneys and lungs. This may result in kidney impairment and tissue lesions. This substance is carcinogenic to humans.

BCF values of 4.2-11, 6.9-20, 57, 39 were calculated in fish for cadmium(SRC), using carp (Cyprinus carpio) which were exposed at concentrations of 50, 20, 4.0, and 1.0 ppb over an 5-week period(1). According to a classification scheme(2), this BCF suggests the potential for bioconcentration in aquatic organisms is low(SRC). It was noted that fish showed abnormalities adn died during the 6th week of exposure at th 500 ppb exposure level(1).

Depending on the degree of exposure, periodic medical examination is suggested.The symptoms of lung oedema often do not become manifest until a few hours have passed and they are aggravated by physical effort. Rest and medical observation are therefore essential.Immediate administration of an appropriate inhalation therapy by a doctor, or by an authorized person, should be considered.Do NOT take working clothes home.