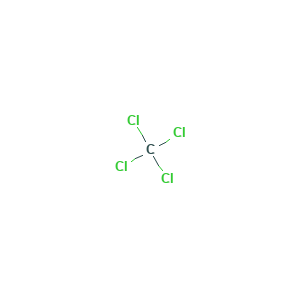 Hazardous to the ozone layer, Category 1

When fighting a fire in which carbon tetrachloride is involved, wear self-contained breathing apparatus.

Personal protection: complete protective clothing including self-contained breathing apparatus. Do NOT let this chemical enter the environment. Collect leaking and spilled liquid in covered containers as far as possible. Absorb remaining liquid in sand or inert absorbent. Then store and dispose of according to local regulations.

Personal protection: complete protective clothing including self-contained breathing apparatus. Do NOT let this chemical enter the environment. Collect leaking and spilled liquid in covered containers as far as possible. Absorb remaining liquid in sand or inert absorbent. Then store and dispose of according to local regulations.

1. ventilate area of spill or leak. 2. collect for reclamation or absorb in vermiculite, dry sand, earth, or a similar material.

Separated from food and feedstuffs and metals. See Chemical Dangers. Ventilation along the floor. Cool.Store in a cool, dry, well-ventilated location. Separate from alkali metals.

NIOSH has recommended that carbon tetrachloride be treated as a potential human carcinogen.

A paste of zinc powder and carbon tetrachloride (with kieselguhr as thickener) will readily burn after ignition by a high-temperature primer.

Decomposes to form chlorine and phosgene.

NTP: Reasonably anticipated to be a human carcinogen

The substance is irritating to the eyes. The substance may cause effects on the liver, kidneys and central nervous system. This may result in unconsciousness. Medical observation is indicated.

Repeated or prolonged contact with skin may cause dermatitis. This substance is possibly carcinogenic to humans.

A harmful contamination of the air can be reached very quickly on evaporation of this substance at 20°C.

The Koc for carbon tetrachloride was measured to be 71(1). According to a classification scheme(4), this Koc value suggests that carbon tetrachloride is expected to have high mobility in soil. Estimated retardation factor in breakthrough sampling in groundwater – 1.44-1.8(2,3).

Use of alcoholic beverages enhances the harmful effect.Depending on the degree of exposure, periodic medical examination is suggested.The odour warning when the exposure limit value is exceeded is insufficient.Do NOT use in the vicinity of a fire or a hot surface, or during welding.