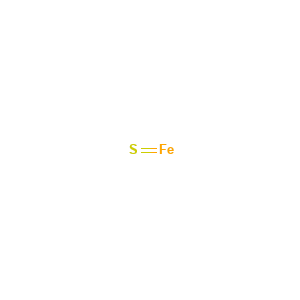 Maintain an open airway and assist ventilation if necessary. Treat shock caused by hemorrhagic gastrointestinitis aggressively with intravenous crystalloid fluids, and replace blood if needed. Patients are often markedly hypovolemic owing to gastrointestinal losses and third spacing of fluids into the intestinal wall and interstitial space. Treat coma, seizures, and metabolic acidosis if they occur. For seriously intoxicated victims (eg, shock, severe acidosis, and/or serum iron > 500-600 mcg/dL) administer deferoxamine. Monitor the urine for the urine for the characteristic orange or pink deferoxamine-iron complex. Therapy may be stopped when the urine returns to normal or when the serum iron level decreases to the normal range. Prolonged deferoxamine has been associated with adult respiratory distress syndrome and Yersinia sepsis.

Oxidized by moist air to sulfur and iron oxide.

Ferrous sulfide/ is occasionally formed unintentionally when materials containing sulfur are treated in iron and steel vessels- eg in petroleum refineries. If the plant is opened and the deposit of ferrous sulfide is exposed to air, its exothermic oxidation may raise temp of gases and vapors in the vicinity. A fine water spray should be directed on such deposits until flammable vapors have been removed by purging. Similar problems may occur in pyrite mines where the air temperature is increased by a continuous slow oxidation of ore.

The use of steel equipment in conjunction with hydrogen sulfide or volatile sulfide compounds will cause it to spontaneously explode in air.

When heated to decomposition it emits toxic fumes of /sulfur oxides/.