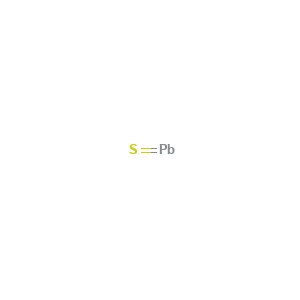 ACCIDENTAL RELEASE MEASURES: Personal precautions, protective equipment and emergency procedures: Use personal protective equipment. Avoid dust formation. Avoid breathing vapors, mist or gas. Ensure adequate ventilation. Evacuate personnel to safe areas. Avoid breathing dust. Environmental precautions: Prevent further leakage or spillage if safe to do so. Do not let product enter drains. Discharge into the environment must be avoided. Methods and materials for containment and cleaning up: Pick up and arrange disposal without creating dust. Sweep up and shovel. Keep in suitable, closed containers for disposal.

The reaction between iodine monochloride and any of the following is vigorous: cadmium sulfide, lead sulfide, silver sulfide, or zinc sulfide [Mellor 2, Supp. 1:502. 1956].

When heated to decomposition it emits very toxic fumes of lead and sulfur oxides.