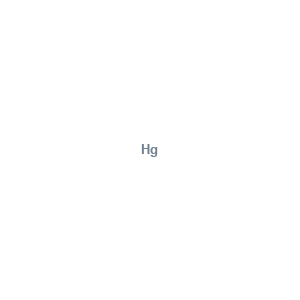 Basic Treatment: Establish a patent airway. Suction if necessary. Watch for signs of respiratory insufficiency and assist ventilations if necessary. Administer oxygen by nonrebreather mask at 10 to 15 L/min. Monitor for pulmonary edema and neat if necessary . Monitor for shock and treat if necessary . Anticipate seizures and treat if necessary . For eye contamination, flush eyes immediately with available water. Irrigate each eye continuously with normal saline during transport . Do not use emetics. For ingestion, rinse mouth and administer 5 ml/kg up to 200 ml of water for dilution if the patient can swallow, has a strong gag reflex, and does not drool. Administer activated charcoal . Mercury and related compounds

Excerpt from ERG Guide 172 [Gallium and Mercury]: Use extinguishing agent suitable for type of surrounding fire. Do not direct water at the heated metal. (ERG, 2016)

Evacuate danger area! Consult an expert! Personal protection: chemical protection suit including self-contained breathing apparatus. Ventilation. Do NOT let this chemical enter the environment. Collect leaking and spilled liquid in sealable non-metallic containers as far as possible. Do NOT wash away into sewer.

Evacuate danger area! Consult an expert! Personal protection: chemical protection suit including self-contained breathing apparatus. Ventilation. Do NOT let this chemical enter the environment. Collect leaking and spilled liquid in sealable non-metallic containers as far as possible. Do NOT wash away into sewer.

Upon heating, toxic fumes are formed. Decomposes on heating. This produces toxic fumes. Reacts violently with ammonia and halogens. This generates fire and explosion hazard. Attacks aluminium and many other metals. This produces amalgams.

Slightly volatile at ordinary temp; when pure, does not tarnish on exposure to air at ordinary temp, but when heated to near boiling point, slowly oxidizes to mercuric oxide (hgo)

Vapors are heavier than air and will collect and stay in poorly-ventilated or low-lying areas.Hazardous concentrations may develop quickly in enclosed, poorly-ventilated, or low-lying areas.MERCURY forms an explosive acelylide when mixed with acetylene. Can form explosive compounds with ammonia (a residue resulting from such a reaction exploded when an attempt was made to clean it off a steel rod [Chem. Eng. News 25:2138. 1947]. Chlorine dioxide (also other oxidants, such as: chlorine, bromine, nitric acid, performic acid), and mercury explode when mixed [Mellor 2, Supp. 1:381. 1956]. Methyl azide in the presence of mercury is potentially explosive [Can. J. Chem. 41:1048. 1963]. Ground mixtures of sodium carbide and mercury can react vigorously [Mellor 5:848. 1946-47]. Ammonia forms explosive compounds with gold, mercury, or silver. (Eggeman, Tim. “Ammonia”. Kirk-Othmer Encyclopedia of Chemical Technology. John Wiley & Sons, Inc. 2001.).

Elemental mercury Studies on the reproductive and developmental effects of elemental mercury in humans have shown mixed results. One study did not see an association between mercury exposure and miscarriages, while another revealed an increase in the rate of spontaneous abortions. Another study showed a higher than expected frequency of birth defects, which was not confirmed in a fourth study. (1,) Inorganic Mercury No information is available on the reproductive or developmental effects of inorganic mercury in humans. Animal studies have reported effects including alterations in testicular tissue, increased resorption rates, and abnormalities of development. (1,,) Methyl mercury A large number of human studies on the systemic effects of methyl mercury have been carried out. This is the result of two large scale poisoning incidents in Japan and Iraq and several epidemiologic studies investigating populations that consume large quantities of fish. (1,2) Oral exposure to methyl mercury has been observed to produce significant developmental effects in humans. Infants born to women who ingested high concentrations of methyl mercury exhibited CNS effects, such as mental retardation, ataxia, deafness, constriction of the visual field, blindness, and cerebral palsy. At lower methyl mercury concentrations, developmental delays and abnormal reflexes were noted. (1,,) Considerable new data on the health effects of methyl mercury are becoming available. Large studies of fish and marine mammal consuming populations in Seychelles and Faroe Islands are being carried out. Smaller scale studies also describe effects around the U.S. Great Lakes. (1,)

The substance is irritating to the skin. Inhalation of the vapour may cause pneumonitis. The substance may cause effects on the central nervous system and kidneys. The effects may be delayed. Medical observation is indicated.

The substance may have effects on the central nervous system and kidneys. This may result in irritability, emotional instability, tremors, mental and memory disturbances and speech disorders. May cause inflammation and discoloration of gums. Cumulative effects are possible. Animal tests show that this substance possibly causes toxic effects upon human reproduction.

A harmful contamination of the air can be reached very quickly on evaporation of this substance at 20°C.

Methylmercury is formed naturally in aquatic and terrestrial environments from elemental mercury. … methylation is likely to occur in upper sedimentary layers of sea or lake bottoms.

Upon entering an aqueous system, virtually any mercurial cmpd may be microbially converted to methylmercury. Mercurial cmpd

Depending on the degree of exposure, periodic medical examination is suggested.There is no odour warning even when toxic concentrations are present.Do NOT take working clothes home.