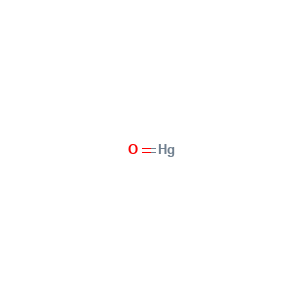 This material is highly toxic by ingestion, inhalation, or skin absorption. Very short exposure to small quantities may cause death or permanent injury. Following ingestion, mercuric oxide is readily converted to mercuric chloride, the most dangerous mercury compound. Mercuric oxide dust has a corrosive effect on eyes, skin, and respiratory tract. People with a history of allergies or known sensitization to mercury, chronic respiratory disease, nervous system disorders, or kidney disorders are at increased risk from exposure. (EPA, 1998)

Basic Treatment: Establish a patent airway. Suction if necessary. Watch for signs of respiratory insufficiency and assist ventilations if necessary. Administer oxygen by nonrebreather mask at 10 to 15 L/min. Monitor for pulmonary edema and neat if necessary . Monitor for shock and treat if necessary . Anticipate seizures and treat if necessary . For eye contamination, flush eyes immediately with available water. Irrigate each eye continuously with normal saline during transport . Do not use emetics. For ingestion, rinse mouth and administer 5 ml/kg up to 200 ml of water for dilution if the patient can swallow, has a strong gag reflex, and does not drool. Administer activated charcoal . Mercury and related compounds

If material involved in fire: Extinguish fire using agent suitable for type of surrounding fire. (Material itself does not burn or burns with difficulty.) Use water in flooding quantities as fog. Use foam, dry chemical, or carbon dioxide.

When heated to decomposition (932F) it decomposes into mercury and oxygen. Fumes from fire may contain poisonous mercury vapor; oxygen may increase intensity of fire. Explosion of mercuric oxide may occur with friction or application of heat. Avoid reducing agents. Avoid light; may decompose into mercury and oxygen. Hazardous polymerization may not occur. (EPA, 1998)

Consult an expert! Personal protection: chemical protection suit. Do NOT let this chemical enter the environment. Sweep spilled substance into covered containers. If appropriate, moisten first to prevent dusting. Carefully collect remainder. Then store and dispose of according to local regulations. Do NOT absorb in saw-dust or other combustible absorbents.

Consult an expert! Personal protection: chemical protection suit. Do NOT let this chemical enter the environment. Sweep spilled substance into covered containers. If appropriate, moisten first to prevent dusting. Carefully collect remainder. Then store and dispose of according to local regulations. Do NOT absorb in saw-dust or other combustible absorbents.

Cleanup: Mercury removal from wastewater can be accomplished by these processes: BMS process; chlorine is added to the wastewater, oxidizing any mercury present to the ionic state. The BMS adsorbent (an activated carbon concentrated of sulfur compound on its surface) is used to collect ionic mercury. The spent adsorbent is then distilled to recover the mercury, leaving a carbon residue for reuse or disposal. TMRIMAC Process: wastewater is fed into a reaction whereby a slight excess of chlorine is maintained, oxidizing any mercury present to ionic mercury. The liquid is then passed through the TMRIMAC ion exchange resin where mercury ions are adsorbed. The mercury is then stripped from the spent resin with hydrochloric acid solution. Mercury compounds

Separated from food and feedstuffs, reducing agents, chlorine and reactive substances. See Chemical Dangers. Keep in the dark. Store in an area without drain or sewer access. Provision to contain effluent from fire extinguishing. Well closed.PROTECT FROM LIGHT

Avoid inhalation of dust. Use local exhaust or breathing protection.

Decomposes above 500°C . This produces highly toxic fumes including mercury and oxygen. This increases fire hazard. The substance is a strong oxidant. Reacts violently with reducing agents. Mixtures with metals and elements such as sulfur and phosphorus are shock-sensitive.

Decomposes on exposure to air

Flammable by chemical reaction. A powerful oxidizer.MERCURIC OXIDE is light sensitive. When hydrazine hydrate is dropped on mercuric oxide, an explosion occurs [Mellor 8:318. 1946-47]. Hypophosphorous acid reduces mercuric oxide explosively to the metal [Mellor 4:778. 1946-47]. When heated to decomposition (932 F) it decomposes into mercury and oxygen. Fumes from fire may contain poisonous mercury vapor; oxygen may increase intensity of fire. Explosion of mercuric oxide may occur with friction or application of heat. Avoid reducing agents. Avoid light; may decompose into mercury and oxygen. Fire risk in intimate contact with organic matter.

Incompatibilities: by triturating mercuric oxide with reducing agents mercurous cmpd & metallic mercury may be formed. in prepn of ointments, contact with metal must be avoided. salts are formed with many acids.

When heated to decomposition it emits highly toxic fumes of mercury

A4: Not classifiable as a human carcinogen. Mercury, elemental and inorganic forms, as Hg

The substance is mildly irritating to the eyes, skin and respiratory tract. The substance may cause effects on the kidneys. Medical observation is indicated.

The substance may have effects on the kidneys, central nervous system and peripheral nervous system. This may result in ataxia, sensory and memory disturbances, tremors, muscle weakness and kidney impairment.

Depending on the degree of exposure, periodic medical examination is suggested.Do NOT take working clothes home.Red and Yellow mercuric oxide are common names.Mercury is a common ingredient found in some skin lightening soaps and creams. Long-term use of such products may cause kidney damage, skin rashes, scarring, as well as anxiety, depression or psychosis and peripheral neuropathy.