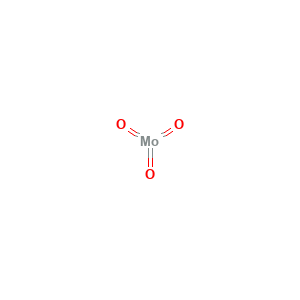 Fires associated with this material can be controlled with a dry chemical, carbon dioxide, or Halon extinguisher. (NTP, 1992)

Flash point data for this chemical are not available, but it is probably non-flammable. (NTP, 1992)

MOLYBDENUM TRIOXIDE reacts violently with chlorine trifluoride, lithium, potassium and sodium. Readily combines with acids and bases to form a series of polymeric compounds. Incompatible with interhalogens and metals. A violent detonation occurs when heated with molten magnesium. (NTP, 1992)