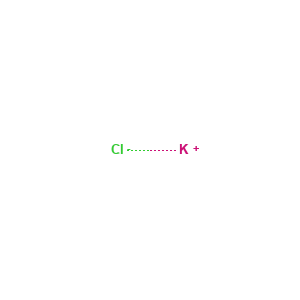 SYMPTOMS: Large doses of this chemical usually induce vomiting, so acute intoxication by mouth is rare. If no pre-existing kidney damage, it is rapidly excreted. Poisoning disturbs the rhythm of heart. Large doses by mouth can cause gastrointestinal irritation, purging, weakness, and circulatory disturbances. (NTP, 1992)

KCl poisoning can be potentially life-threatening, particularly in massive ingestions of sustained-release preparations. Profound hyperkalemia, developing over several hours, can lead to cardiac arrhythmias and death. This case series reports three episodes of sustained-release KCl poisoning in two individuals requiring whole bowel irrigation or hemodialysis. The first two episodes, in the same patient, illustrate the contrast between the successful use of decontamination versus the need for hemodialysis. The second case, in a child, illustrates the need for tertiary level pediatric expertise in managing this type of poisoning. Whole bowel irrigation with polyethylene glycol is a resource-intensive procedure most beneficial when large numbers of radio-opaque tablets are seen in the stomach. In cases where most of the tablet matter has already been absorbed, extracorporeal methods of rapidly reducing the total body burden of potassium, such as hemodialysis, might be life-saving.

Flammability data is not available, but this compound is probably nonflammable. (NTP, 1992)

Sweep spilled substance into covered containers. Carefully collect remainder. Then store and dispose of according to local regulations. Personal protection: particulate filter respirator adapted to the airborne concentration of the substance.

Sweep spilled substance into covered containers. Carefully collect remainder. Then store and dispose of according to local regulations. Personal protection: particulate filter respirator adapted to the airborne concentration of the substance.

POTASSIUM CHLORIDE is not in general strongly reactive. Violent reaction with BrF3 and with a mixture of sulfuric acid potassium permanganate mixture (NTP, 1992). Reacts with concentrated sulfuric acid to generate fumes of hydrogen chloride.

An attempt to prepare permanganyl chloride by cautiously adding concn sulfuric acid to an intimate mixture of the salts at 0 deg C in clean glass apparatus caused a violent explosion.

The substance is irritating to the eyes and respiratory tract. Ingestion of large amounts could cause effects on the cardiovascular system. This may result in cardiac dysrhythmia.

Evaporation at 20°C is negligible; a nuisance-causing concentration of airborne particles can, however, be reached quickly when dispersed, especially if powdered.