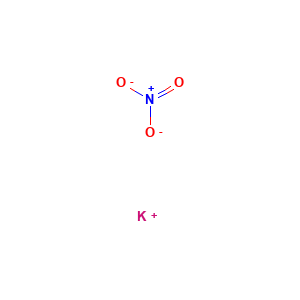 Exposure can cause mild irritation of eyes, nose and throat. (USCG, 1999)

Maintain an open airway and assist ventilation if necessary. Administer supplemental oxygen. Treat hypotension with supine positioning, intravenous crystalloid fluids, and a low dose -pressor if needed. Monitor vital signs and ECG for 4 to 6 hours. Symptomatic methemoglobinemia may be treated with methylene blue. … Administer activated charcoal. Gastric emptying is not necessary for small ingestions if activated charcoal can be given promptly . Hemodialysis and hemoperfusion are not effective. Severe methemoglobinemia in infants not responsive to methylene blue therapy may require exchange transfusion. Nitrates and Nitrites

If material on fire or involved in fire: Flood with water. Cool all affected containers with flooding quantities of water. Apply water from as far a distance as possible.

Special Hazards of Combustion Products: May produce toxic nitrogen oxides upon decomposition. Behavior in Fire: Strong oxidizer which may react explosively when mixed with reducing agents. Mixture may detonate by heat or shock. Increases the flammability of any combustible material. (USCG, 1999)

Decomposes on heating. This increases fire hazard. The substance is a strong oxidant. It reacts with combustible and reducing materials.

A micro Parr calorimeter exploded when the wrong proportions of these ingredients were used. The intended mixture was 4.0 g sodium peroxide, 0.2 g dextrose, and 0.2 g potassium nitrate; actual proportions were 0.35 g, 2.59 g, and 0.2 g respectively. There was insufficient sodium peroxide to dissolve decomposition gases, hence a rapid temp and pressure build-up caused the Parr bomv to burst.

The substance is irritating to the eyes, skin and respiratory tract. Ingestion could cause effects on the blood. This may result in the formation of methaemoglobin. The effects may be delayed. Medical observation is indicated.

Rinse contaminated clothing with plenty of water because of fire hazard.Specific treatment is necessary in case of poisoning with this substance; the appropriate means with instructions must be available.