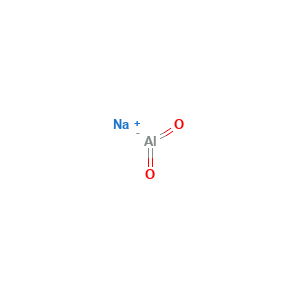 Excerpt from ERG Guide 154 [Substances – Toxic and/or Corrosive (Non-Combustible)]: TOXIC; inhalation, ingestion or skin contact with material may cause severe injury or death. Contact with molten substance may cause severe burns to skin and eyes. Avoid any skin contact. Effects of contact or inhalation may be delayed. Fire may produce irritating, corrosive and/or toxic gases. Runoff from fire control or dilution water may be corrosive and/or toxic and cause pollution. (ERG, 2016)

Treatment: to relieve the gi distress /caused by swallowing aluminum salts/… the degree of dehydration & electrolyte loss caused by vomiting & diarrhea must be determined, & corrected by iv infusions of appropriate solutions. aluminum salts

Behavior in Fire: Containers may burst when exposed to heat. (USCG, 1999)

Separated from food and feedstuffs and acids. Dry.

The solution in water is a strong base. It reacts violently with acid and is corrosive to aluminium, tin and zinc. Reacts with ammonium salts. This generates fire hazard.

A4: Not classifiable as a human carcinogen. Aluminum metal and insoluble compounds

The substance is corrosive to the eyes, skin and respiratory tract. Corrosive on ingestion. Medical observation is indicated.