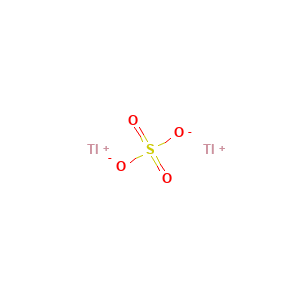 Rinse mouth. Give one or two glasses of water to drink. Refer immediately for medical attention.

Rated as extremely toxic. The probable oral lethal dose in humans is 5 to 50 mg/kg, or between 7 drops and 1 teaspoon for a 150-pound person. The mean lethal dose in an adult is probably about 1 gm of thallium sulfate. Chronic exposure causes hair loss starting 10 days after exposure and complete baldness in about a month. (EPA, 1998)

Gave intravenous thallium sulfate to a small group of rats & simulated thallium kinetics on the basis of a three-compartment model. … concluded that a significant exchange of thallium occurred between the tissues & the intestinal contents … described as an entero-enteral cycle. … gave radioactive thallous nitrate & thallous sulfate orally to 1 pt with metastatic osteogenic sarcoma & found rate of excretion in urine to be 3.2% per day of amount remaining in body. thallium excretion in both urine & feces may persist for many weeks in spite of low plasma levels in poisoned patients.

Extinguish fire using agent suitable for type of surrounding fire. Material itself does not burn or burns with difficulty. Use water in flooding quantities as fog. Use “alcohol” foam, dry chemical or carbon dioxide. Wear positive pressure self-contained breathing apparatus when fighting fires involving this material.

When heated to decomposition, it emits very toxic fumes of thallium and sulfur oxide. (EPA, 1998)

Personal protection: particulate filter respirator adapted to the airborne concentration of the substance and complete protective clothing. Do NOT let this chemical enter the environment. Sweep spilled substance into sealable containers. If appropriate, moisten first to prevent dusting. Carefully collect remainder. Then store and dispose of according to local regulations.

Personal protection: particulate filter respirator adapted to the airborne concentration of the substance and complete protective clothing. Do NOT let this chemical enter the environment. Sweep spilled substance into sealable containers. If appropriate, moisten first to prevent dusting. Carefully collect remainder. Then store and dispose of according to local regulations.

Provision to contain effluent from fire extinguishing. Store only in original container. Well closed. Separated from strong oxidants and food and feedstuffs. Store in an area without drain or sewer access.

Use closed system or breathing protection.

Decomposes on heating. This produces toxic fumes including thallium and sulfur oxides. Reacts with strong oxidants.

The substance is irritating to the eyes, skin and possibly the respiratory tract. The substance may cause effects on the gastrointestinal tract, central nervous system and peripheral nervous system. Exposure could cause hair loss. Ingestion of large amounts could cause effects on the cardiovascular system, kidneys and liver. Ingestion of large amounts could cause death. The effects may be delayed. Medical observation is indicated. See Notes.

The substance may have effects on the nervous system. May cause hair loss.

The symptoms of neurological disorders do not become manifest until after a few days.Depending on the degree of exposure, periodic medical examination is suggested.Do NOT take working clothes home.See ICSCs 0077 and 1221.